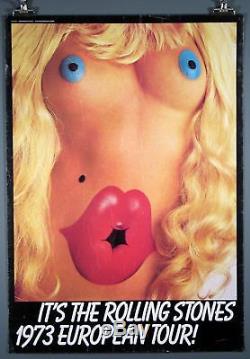 Early in the band's history Jagger and Richards formed a songwriting partnership and gradually took over leadership of the band from the increasingly troubled and erratic Jones. At first the group recorded mainly covers of American blues and R&B songs, but since the 1966 album.

Their releases have mainly featured Jagger/Richards songs. Mick Taylor replaced an incapacitated Jones shortly before Jones's death in 1969. Taylor quit in 1974, and was replaced in 1975 by Faces guitarist Ronnie Wood, who has remained with the band ever since. Wyman left the Rolling Stones in 1992; bassist Darryl Jones, who is not an official band member, has worked with the group since 1994. Looking for a certain poster?

The item "The Rolling Stones, 1973 European Tour Vintage Poster" is in sale since Saturday, April 9, 2011. This item is in the category "Entertainment Memorabilia\Music Memorabilia\Rock & Pop\Artists R\Rolling Stones\Concert Memorabilia". The seller is "poster-art" and is located in Rochester, New York.